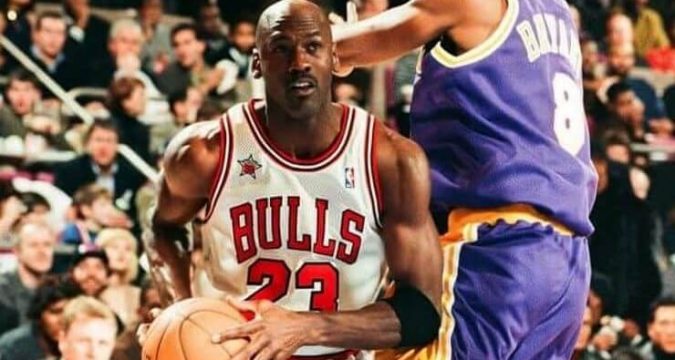 If you had to name which professional basketball stars are the most influential NBA players in the history of the league, who would make your list? Names that come to mind include Michael Jordan, Bill Russell, Kobe Bryant, Magic Johnson, Larry Bird, LeBron James and Stephen Curry.

While Jordan is clearly the greatest basketball player of all time, LeBron James is the wealthiest active player. Back in June, James became the first active NBA player to reach billionaire status. The four-time MVP also led the league in jersey sales last season. That’s a sign of massive influence.

Michael Jordan is to basketball as Babe Ruth is to baseball, and Tom Brady is to football. Jordan’s net worth in 2022 is $2.1 billion. He played 15 seasons in the NBA. The 6’6″ guard was selected third overall by the Chicago Bulls in the 1984 NBA Draft.

Through 1,072 career games, MJ averaged 30.1 points, 6.2 rebounds, 5.3 assists and 2.3 steals per game. The legend went on to complete two three-peats with the Bulls, winning a total of six NBA championships and Finals MVPs.

If not for the 10-time scoring champion, how many people would love basketball and support the NBA today? Does Air Jordan ring any bells? The shoe line is iconic. To add to that, Jordan’s dunk from the free throw line will always be remembered throughout course of history. Hands down, Jordan is at the top of the “Most Influential NBA Players of All Time” list.

Plus, his Game 1 jersey of the 1998 NBA Finals is expected to sell for $5 million at the Sotheby’s Auction House in September. The fact his memorabilia is still selling for seven figures in 2022 speaks volumes.

Bill Russell won 11 championships with the Boston Celtics. Not only did Russell help the NBA break race barriers in the fifties and sixties, but he also dominated opposing players on the court. In 963 career games, the 6’10” center averaged 15.1 points, 22.5 rebounds and 4.3 assists per game.

Additionally, if not for Russell’s mark on the NBA, would MJ still have played? It’s just something to think about. Both Jordan and Russell were named to the NBA’s 50th and 75th Anniversary Team. When Russell passed away on July 31, Jordan was asked about the player’s significance to the game of basketball.

The six-time NBA champion left this comment: “Bill Russell was a pioneer – as a player, as a champion, as the NBA’s first black head coach and as an activist. He paved the way and set an example for every black player who came into the league after him, including me. The world has lost a legend. My condolences to his family and may he rest in peace.”

Next, Kobe Bryant was selected 13th overall by the Charlotte Hornets in the 1996 NBA Draft. However, he was then immediately traded to the Los Angeles Lakers. At 18, Bryant was drafted out of Lower Merion High School. He was one of the youngest players ever to get drafted into the NBA, alongside Andrew Bynum, Jermaine O’Neal and LeBron James.

The memes on social media also made Bryant an icon. Throughout the 2000’s, kids would shout “Kobe” before tossing balled up paper into the trash can.

Before the 1996-97 NBA season, Bryant signed a six-year deal with Adidas worth $48 million. Of course, his first signature shoe was the Equipment KB 8. His endorsement deals with Coca-Cola, McDonald’s, Spalding, Upper Deck and other companies only increased his popularity. And he was the cover athlete for nine different video games. Rest in peace to this legend.

Lastly, LeBron James has to complete this particular list. In the minds of millions of fans, King James will retire a couple of seasons from now owning most records. His impact on the game of basketball is undeniable. But his influence extended to off-court activities too. For example, in 2013 he led the league in shoe sales.

James was selected first overall by the Cleveland Cavaliers in the 2003 NBA Draft. He was drafted out of St. Vincent-St. Mary High School. As a rookie, James signed a seven-year, $87 million deal with shoe deal with Nike.

To add to those accomplishments, James has been selected All-NBA First Team a total of 13 times in his playing career. Through 1,366 career games, the forward has averaged 27.1 points, 7.5 rebounds, 7.4 assists and 1.6 steals per game.

Equally important, James also participated in his “King for Kids” charity bike-a-thon in 2009. Chris Paul was one of the riders as well.

On and off the court, LeBron James is one of the most influential NBA Players of all time.