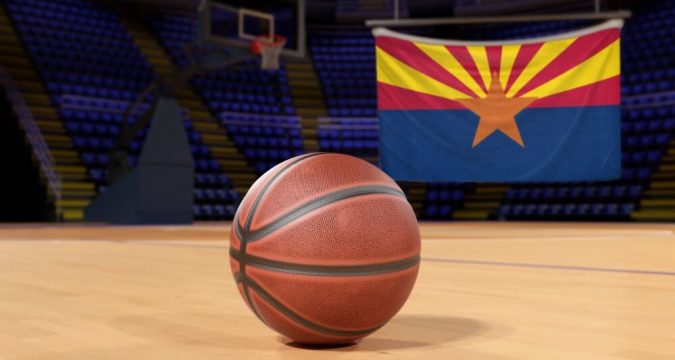 In the early part of September 2021, the internet in the Southwest lit up as Arizona sports betting launched for the first time. The ability to legally wager on sports included both retail and more importantly online sports betting.

Arizona residents had waited a long time for this day. They would no longer have to make the journey to nearby Nevada for sports betting. And for the state government, Arizona would no longer see the flow of betting tax dollars disappear over state lines.

Little did fans know how much fun and excitement would come from local Arizona teams raising their game.

When Arizona sportsbooks sprang into action on September 9th, 2021 the focus of sports bettors was firmly on college and pro football. In fact, the NFL’s Arizona Cardinals (11-6) ended up having a pretty good season that ended with a loss to the Los Angeles Rams 34-11 in the first round of the playoffs. The Cardinals had promised much more in the early going, starting 7-0. And there is no shame in losing to the eventual Super Bowl Champions. But in the end, it will go down as a good but not entirely satisfactory campaign given the hot start.

While the focus was on football, Arizona basketball teams were quietly going about their business. By the time the football schedule ended in January, sports fans realized both their favorite Arizona NBA and men’s NCAA basketball teams were already on course for potentially historic seasons.

With March Madness just around the corner, the NCAA’s Arizona Wildcats are ranked #2 in the nation (AP Coaches Poll) . Meanwhile, the Phoenix Suns have (by far) the best record in the NBA. Could Arizona teams take home the two most prestigious basketball titles in the same year?

As a point of reference, one can only imagine the impact on the market in Ohio if sports betting had been legal in that state during the recent NCAA football and NFL seasons.

The Cincinnati Bearcats finished as runner-ups for the NCAA National Championship. The Cincinnati Bengals made the Super Bowl, losing to the aforementioned Los Angeles Rams. Additionally, the Ohio State Buckeyes themselves had a fine season, finishing with a record of 11-2. It’s not hard to imagine that local betting would have been through the roof. The good news there is that Ohio sports betting is due to go live by the end of 2022.

Yes, sports bettors betting on home-state teams has proven to be a key component of the sports betting success many states are reporting. Arizona stands as a poster child for this success. Let’s take a look at how the Wildcats and Suns have performed to date.

Heading into the Pac 12 tournament, the Wildcats were the #1 seed. And with a record of 28-3, they are arguably the best team in the nation. Gonzaga, who are ranked #1, had the same number of losses but two fewer wins at 26-3.

Should the Wildcats win the Pac 12 tournament, they would be guaranteed a #1 seed in their March Madness bracket. It’s even conceivable they would be the top team in the West, although Gonzaga might have something to say about that. Even with a loss in the Pac 12, a #1 seed would still be possible while a top 2 seeding would be a certainty.

Savvy bettors are also looking in their direction for value. The Wildcats were listed at +700 to win the NCAA tournament, although a Pac 12 victory will surely shorten those odds.

After losing to the Milwaukee Bucks in the 2020-2021 NBA Finals, big things were expected from the Phoenix Suns coming into 2021-2022. With a late season record of 53-14, they have delivered to expectations and then some. For a little perspective on the Suns superiority, the next best record in the NBA belongs to the Memphis Grizzlies at 46-22. In the Eastern Conference, the Miami Heat are tops at 45-23.

Last year, Suns sports bettors were able to sneak up on bookmakers with a fine ATS record of 42-28-2. Sportsbooks have made things a little tougher on Phoenix Suns betting fans this year as evidenced by the team’s 32-30-1 record ATS. They are no longer the sleepers they once were.

For futures betting, the Suns are currently +450 to win the NBA Championship. As good as Phoenix is, it’s hard to see much value there. The “secret” of Arizona basketball prowess is out of the bag.