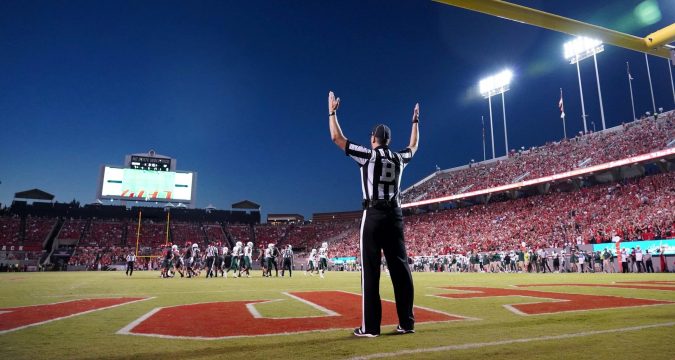 There are few things in life more glorious than a perfectly executed passing touchdown. In this latest dive into the CFB records book, we look at which college football quarterbacks lit it up more than the rest with the most career touchdowns passing.

There are 25 quarterbacks that have entered the CFB record books by throwing over 100 touchdowns passing in their esteemed careers. However, the following players have elevated themselves above the rest as the top five leaders in career touchdowns passing. With the best quarterbacks regularly completing three seasons before heading to the NFL, we’re unlikely to see this particular CFB record broken any time soon.

As he bounces from team to team as the archetypal journeyman, it might be hard for NFL fans to understand that Case Keenum’s name is intertwined with many of the QB-related CFB records. He’s statistically the most successful ever CFB quarterback in terms of both career yards passing and touchdowns, throwing 155 scores for Houston.

If a quarterback throws five touchdowns in a game now, we marvel like it’s never been done before. However, Keenum made multi-touchdown games a regularity. During his career, he had 12 games where he threw for five or more touchdowns, including a clash in 2011 with Rice where he threw nine. From his first score against Oregon in 2007, to his final touchdown against Penn State, Keenum was a TD machine.

After four consecutive seasons of being one of the most dominant QBs in college football, Boise State’s Kellen Moore enters the CFB records with the second-most career touchdowns passing in the history of the sport. Between 2008 and 2011, Moore threw 142 TD passes — an average of nearly 36 touchdowns per season.

In his first season as the starter for the Broncos, Moore threw for 25 touchdowns. The following season, he posted 39 scores that included five-TD outings against Hawaii, Idaho, and Nevada. While 2010 saw a minor regression, the Boise State QB still tallied 35 scores. Meanwhile, Moore added a receiving touchdown to his résumé against Louisiana Tech.

Moore saved his best for last, throwing 43 touchdowns in the 2011 season. The Boise State QB had just three games where he threw less than three touchdowns. Furthermore, he added two more five-TD outings to his career tally. His 142nd and final touchdown came as the Broncos brutalized Arizona State 56-24 in the Maaco Bowl.

Texas Tech quarterback Graham Harrell’s 134 career touchdowns passing are good enough to see him sit third in the CFB records. Between 2006 and 2008, Harrell put together some of the most productive TD performances we’ve seen in college football. If he’d played a full season of football in 2005, he’d likely have challenged Keenum right at the top of this list.

The top five touchdown passing leaders swells to a top six by virtue of a three-way tie for fourth place in the CFB records. Colt Brennan, Rakeem Cato, and Baker Mayfield all tallied 131 passing touchdowns during their illustrious college football careers.

For the longest time, Brennan held the record for most single-season touchdowns passing. Sandwiched in between 30+ TD seasons, the remarkable Hawaii QB put together a magnificent 58-touchdown campaign in 2006. In that year alone, he had more games of 5+ touchdowns (8) than some quarterbacks manage in an entire career.

After throwing 15 touchdowns in his first season for Marshall, Cato steadily became more productive with every passing season. In his final season, the Thundering Herd passer tallied 40 touchdowns that included a seven-touchdown outing against Western Kentucky. Cato’s name remains in the CFB records book with the most consecutive games throwing a touchdown. The Marshall QB threw a touchdown in 46 straight games, a run ended only by the conclusion of his college career.

The only QB in the CFB records book for career touchdown passes to play for two different teams, Mayfield threw 12 touchdowns for Texas Tech before transferring to Oklahoma. He returned to haunt the Red Raiders with a seven-TD performance in 2016. However, it was the 43 touchdowns in 2017 that netted Mayfield the Heisman Trophy and secured his place near the top of the CFB records book.