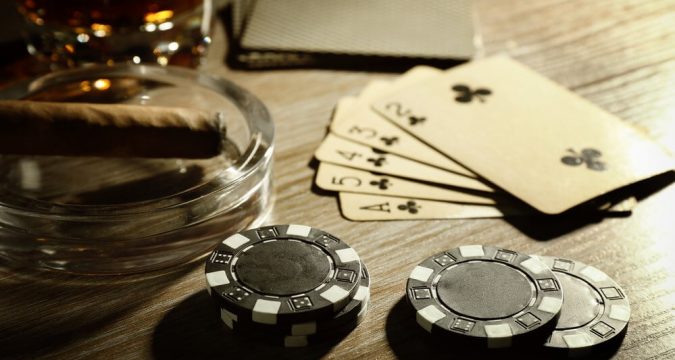 In the annals of gambling history, few names raise a brow more than Nick the Greek. Born on April 27, 1883 in Greece, Nikolaos Andreas Dandolos would go on to become one of the most famous sports and horse betting prognosticators and poker players in history.

Dandolos was born into money, which meant he was always destined to live a privileged life. However, he was cut loose by his father at the age of 18 to set sail for the United States of America with a weekly allowance of $150.

He started his North American adventure in Chicago, only to move later to Montreal, Canada. This is where he began betting on horses. Not shy about placing large wagers, he would soon build his bankroll up to a reported $500,000 which was huge money in the early 1900s. With this inflated bankroll, he headed back to Chicago to test his prowess as a poker and dice player.

However, it wasn’t all smooth sailing. He busted his roll while learning to master the games of poker and craps. But as a gambler, even losing has its benefits. His reputation was building as an action player, never a bad thing in the gambling community.

At the same time, his stature as a high-rolling poker player was also growing. Word spread of the young man’s substantial wins and losses in poker games and dice tournaments. He was also famous for his gambling stamina, sometimes going through gambling binges that would last weeks. Legend has it he once lost $1.6 million in a New York dice tournament over a 12-day stretch.

With money seemingly to spare for his gambling ventures, Nick the Greek’s presence in poker events was in high demand. By 1931, he made the decision to move to Las Vegas where he would get a chance to go up against some of the best gamblers of his generation. One of those gamblers was the legendary poker player Johnny Moss.

From January to May of 1949, Dandolos participated in a poker event that would change the professional poker-playing community forever. It was the legendary casino owner Benny Binion who conceived the idea of setting up a head-to-head poker match between two of the best poker players in the world, Dandolos and Moss.

Over the course of the event held at Binion’s casino, the two players engaged in every poker variation known to man. It ended up being a one-sided affair in favor of Moss. Over the five months of the event, Dandolos suffered massive losses, estimated to be somewhere between $2 million and $4 million.

It led to one of the most famous quotes in gambling history, when Dandolos finally decided to wave the white flag. He got up from the table and said, “Mr. Moss, I have to let you go.” The poker marathon between these two greats was the precursor to the now famous World Series of Poker, which for many years was held at the Binion’s Casino in downtown Las Vegas.

Encounter With A New York Mobster

Nick the Greek knew of no opponent he would avoid at the poker table. Once upon a time in New York, as legend goes, he sat across from New York mafia kingpin Frank Costello. After cleaning out Costello’s pockets, the crime boss was purported to say, “Greek, you leave the table because you are a coward!” Dandolos was not a coward. He turned to the gallery and asked a VIP bystander to shuffle a deck of cards. He turned to Costello and stated he was willing to “cut cards” for all the money on the table. It was Costello who briefly contemplated his fate, put on his overcoat, and left without incident.

In the late 1950s and early 1960s, The Greek became known for his involvement in sports and horse betting. He began making appearances on National Television where he would offer his predictions on important Triple Crown horse races. He became a kind of TV gambling celebrity. This was Dandolos in his heyday.

His gambling philosophy was very simple: “Never bet on anything that can talk.” Dandolos didn’t play at casino tables, preferring to avoid the house’s edge on games like Blackjack and Roulette. Nick liked to play a man face-to-face. It was there that he felt he had an advantage by being able to read his opponent’s weaknesses. He also banked on his reputation to intimidate other gamblers.

Like many lifelong gamblers before and since, Dandolos was broke in his later years. In the waning years of his life, he frequented the poker rooms in Gardena, California where he could be spotted playing at the lower-limit tables. He was once approached by someone who knew his legend and asked why he was there. Without batting an eye, Nick the Greek politely said: “Hey, it’s action, isn’t it?”. He was a true gambling warrior until the very end.

Throughout his life, Dandolos was known as a philanthropist, reputed to have donated millions to charitable causes. Maybe it was appropriate that Nikolaos Andreas Dandolos passed away on Christmas Day in 1966, aged 83. Frank Sinatra was among his funeral attendees. He was voted into the Gambling Hall of Fame in 1979.