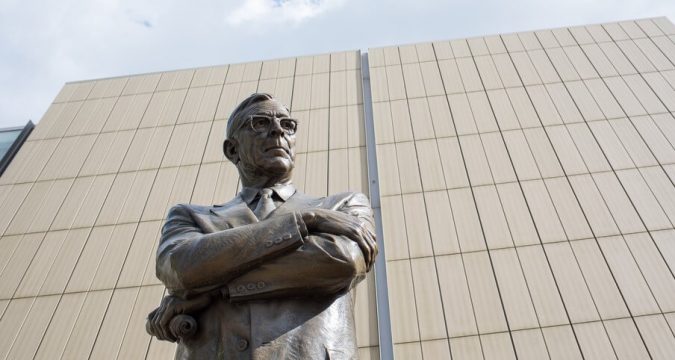 Since 1939, the NCAA has been crowning a Men’s National Championship basketball team. While there have been plenty of surprises throughout the years, it’s usually one of the best teams that rises to the top. So who might be considered the best of the best? In our opinion, there are five teams that historically stand above all others.

Of course, selecting the five best college basketball teams of all-time is a subjective affair. But we have tried to center it on some objective measures. Above all, they have to have been National Champions in their respective year. Much more subjectively, they have to have been a proper team, not just a roster with superstar names. After all it is the team element that really defines all that is good about collegiate sports. Here we go from #5 to #1!

When Duke won the National Championship in the 91-92 season, it was the team’s second title in a row. That in itself is a rarity in college sports. What made this team stand out above the team from the prior season was the team chemistry. This would be a hallmark of many teams under the guidance of legendary Head Coach Mike Krzyzewski.

On the floor, the team was led by gritty big man Christian Laettner who averaged 21.5 PPG and 7.9 RPG. However, his supporting cast was filled with some of the best college players of all time, including Grant Hill and Bobby Hurley. The team rolled through the entire season with a record of 34-2. The only losses were versus arch-rival North Carolina Tar Heels in Chapel Hill (75-73) and later against the Wake Forest Demon Deacons in a nail-biter.

In the Championship game, they crushed the Michigan Wolverines 71-51.

During his long career as head coach of the Kentucky Wildcats, Rick Pitino showed an amazing knack for recruiting some of the best college players in history. In some ways it’s more of a surprise he only won two titles. The 95-96 team was his crowning achievement.

With top talents like Tony Delk, Antoine Walker, Walter McCarty, Derek Anderson, and Ron Mercer, it makes sense that this version of the Wildcats ended up as the second-best scoring team in the country at just over 91 PPG. They finished the season with a record of 34-2 and steamrolled through the NCAA tournament, winning six games by an average margin of just over 22 PPG.

The “Untouchables” capped off the season with an easy 76-67 win over the Syracuse Orangemen to claim the Championship.

From 1964 to 1975, Head Coach John Wooden led the UCLA Bruins on an incredible run of 10 NCAA College Basketball Championships in 12 seasons. That’s why Wooden is widely accepted as the greatest college coach in history in any sport.

At the center of this run were two big men who can both lay claim to being the GOAT in Men’s College Basketball history. First up was a gangly New York kid named Lew Alcindor. Alcindor led the Bruins to three straight titles with the 67-68 team being the best of the lot.

Throughout the season, they crushed one opponent after another with the only blemish being a 2-point loss to the then #2 ranked Houston Cougars featuring the great Elvin Hayes in the “Game of the Century.” Other notable members of the team included Lucius Allen and Lynn Shackleford.

It’s quite possible that the 1974-1975 version of the Indiana Hoosiers under legendary Head Coach Bobby Knight was better than this one. Unfortunately, an injury to All-American forward Scott May left him hobbled in the NCAA tournament. So the Hoosiers did not take home the title, losing to the Kentucky Wildcats in the Regional Finals.

They would return the next year to deliver on the promise they had shown the year before. Led by the aforementioned Scott May and center Kent Benson, the Hoosiers played like the greatest college team of all time. The team’s precision was uncanny, resulting in a perfect record of 32-0.

After Lew Alcindor departed to become Kareem Abdul-Jabbar and forge one of the greatest professional careers of all time, he handed the baton to a young phenom named Bill Walton. Yet another Wooden protégé, Walton amassed what many consider the greatest college career of all time. Amazingly, he would win the “College Basketball Player of the Year” all three eligible years as a varsity player.

This team was Wooden and Walton’s crowning jewel. They rolled through an undefeated season (30-0) with only two winning margins being by less than 12 points. Their average victory margin was an astonishing 30 points. Total domination. Other notable players on the team included Henry Bibby and Keith (Jamaal) Wilkes.