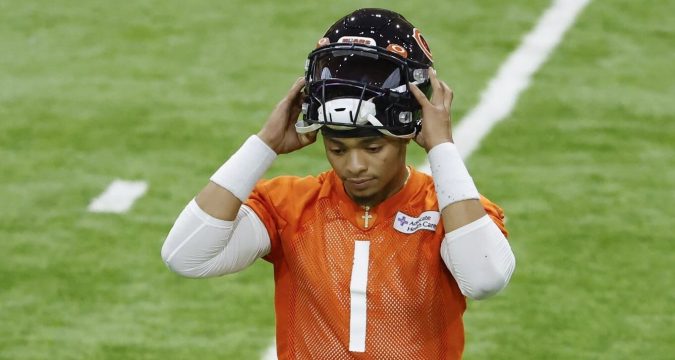 The Chicago Bears are in rebuilding mode as they enter their first training camp under the leadership of new head coach Matt Eberflus. In the wake of the disastrous Ryan Pace/Matt Nagy regime, the Bears have tasked Eberflus and new GM Ryan Poles with fixing a mediocre roster from scratch.

Chicago’s brain trust has sold off mainstay talents like Khalil Mack and Anthony Miller on the trade market and let wideout Allen Robinson walk in free agency. The new leadership group has largely stripped the roster to its bare bones, and their rebuild has taken an old-fashioned turn, starting with a young base and hoping to construct something sustainably successful from the ground up.

With NFL season fast approaching, the stakeholders of Illinois online sports betting will be hoping for a much improved showing.

Can Justin Fields make a huge leap in Year 2?

The Bears are clearly hoping that second-year QB Justin Fields takes the next step in his development this summer. At times, the Ohio State alum flashed brilliance as a rookie but had an uneven campaign overall. While several have pointed out that Fields’ supporting cast last season didn’t help him all that much, the rebuilding Bears may have made matters worse with their notable takedown this offseason.

That’s why Fields’ development as a starting QB is the No. 1 storyline to watch heading into Bears training camp.

Starting QBs tend to take their biggest developmental leaps from Year 1 to Year 2. After spending a season in the pros, young QBs now know what to expect and, typically, how to read most defenses, from coverage schemes to blitzes. The Bears are hoping Fields follows the traditional suit.

However, Fields will need to operate behind a makeshift line that was largely accumulated by the previous failed regime. He is also light on weapons at tight end, though, like Fields, those young ragtag players could ascend as well.

Fields needs to show better vision and accuracy than his rookie season. He also needs to show a true command of the offensive personnel and playbook. Essentially, with a new regime in place, he’s auditioning for new bosses who could keep him around or cut bait without any attachment.

Is the offensive line any better?

Last season, Fields was sacked 36 times in just 12 games (10 starts). It was hard for the QB to buy time in the pocket with loose holes in a sinking ship. That said, the majority of last year’s group is still around and expected to block for Fields.

While Cody Whitehair is a solid presence at left guard, he’s surrounded by the unsteady pillars known as Teven Jenkins and Lucas Patrick at left tackle and center, respectively. The right side of the line will probably feature Willie Wright at right guard and Larry Borom at right tackle. Shon Coleman and Julian Davenport will compete for starting spots, but either way, those veterans don’t necessarily instill confidence in the line.

Fields might have to overcome a lot of traffic to ascend into a better QB.

As you can see, there’s a clear pattern here. The Bears are rebuilding in a logical way, but the construction is coming at the expense of their enigmatic young QB. While Darnell Mooney has developed into a viable starting wideout, the rest of the Bears’ receivers fall between “umm… maybe” and “yikes” on the confidence scale.

The Bears have taken flyers on Dante Pettis, Equanimeous St. Brown, N’Keal Harry, Byron Pringle, and David Moore. They are hoping one of those players is able to hit as a veteran presence.

Dazz Newsome and third-round pick Velus Jones Jr. are interesting young players with notable upside, but both have yet to prove themselves. In an optimistic scenario, Harry can complement Mooney as a big target, while Jones becomes the deep threat that can take advantage of Fields’ active arm. It’s a very hopeful scenario, but one that’s not out of the question.

There’s optimism in the secondary

Poles and Eberflus have been slow to build the offense. The same can’t be said for the secondary. With their first two picks in the draft, the Bears bulked up their defensive backfield by adding cornerback Kyler Gordon and safety Jaquan Brisker. The pair of rookies will start immediately and inject some energy into the secondary.

What will happen to Robert Quinn?

The Bears have been shopping the Pro Bowl pass rusher throughout the offseason but have yet to find ideal takers. Trading Quinn will save the Bears $12.9 million in salary cap space, according to Over The Cap.

The Bears are likely waiting for a major injury to a pass rusher in training camp to buy leverage on the trade market. At that point, Quinn could head to a contender, and the Bears could save money and get value for the defender.

In a perfect world, Quinn’s future would be determined within the first week of camp.