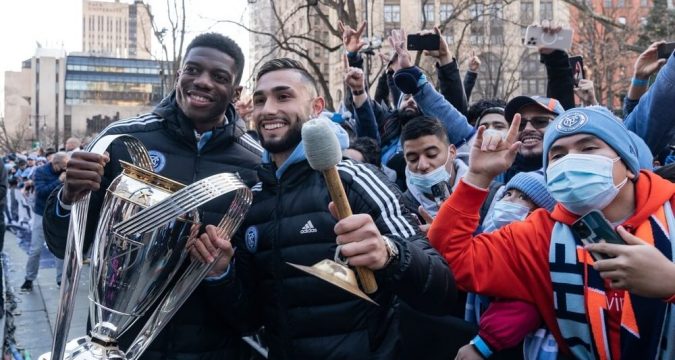 U.S. sports bettors are due to get access to yet another domestic betting market as the new Major League Soccer (MLS) season is about to get underway. Officially, the season will start on February 26th with nine games on the schedule on opening day.

Returning as the defending MLS Cup Champions are New York City FC. With New York online sports betting now live, they will draw significant interest. But perhaps a better indicator of overall form from 2021 is the Supporters’ Shield.

This award goes to the team with the best regular season record. And after a series of disappointing campaigns, the New England Revolution exploded last season with a record of 22-5-7 to win the Eastern Conference. They were led in scoring by Poland’s Adam Buksa with 18 goals. Their hopes of bringing home ultimate glory in the MLS Cup were dashed when they ran into New York in the conference semi-finals. However, the narrow penalty shootout defeat should not detract from their prospects for the upcoming season.

With the slate wiped clean, there appears to be a lot of parity within the two conferences. Most teams are still busy finalizing their rosters with designated and U22 players, hoping to discover a new superstar. Until the new lineups settle down over the course of the opening weeks play, it can be hard to figure out exactly what the pecking order will look like in 2022.

Of course, that also represents an opportunity to find value with the online sportsbooks.

Here are the current future book odds for the 2022 MLS championship (top 10 teams only):

Each year, the MLS awards the “Golden Boot” to the best goal-scorer in the league. In 2021, the award went to New York City FC star Valentine “Taty” Castellanos with 19 goals and 5 assists. This was no mean feat as he held off former Manchester United star Javier Hernandez for the honor. Question for MLS bettors: will he repeat his exploits this time around?

Here’s a list of the top 10 players who look to have the best shot of claiming the 2022 Golden Boot based on last year’s performances:

1. The Los Angeles Football Club will be looking to rebound from an uncharacteristically bad 2021 season. The club really seemed to struggle last season after the departure of 2020 Golden Boot-winner Diego Rossi and injuries to Carlos Vela. A return to form would not be a surprise for this club.

2. It will be interesting to see if the NE Revolution’s 2021 Supporter’s Shield was an aberration or the start of a string of strong seasons. They have lots of young talent returning but a couple of holes in the roster could make it tough to repeat.

3. With stars Nico Lodeiro, Jordan Morris, and Raul Ruidiaz on the field, the Seattle Sounders FC are again loaded for bear. The reality is nothing went right in 2021 for a team that looked to have legitimate title aspirations. If they avoid a similar fate in 2022, odds of +750 might be too high.

4. In 2021, a bizarre series of injuries to key players kept the Columbus Crew from ever establishing any kind of rhythm on the field. They missed the playoffs. A little better luck in 2022 could see this football club sitting as one of the best in the league.