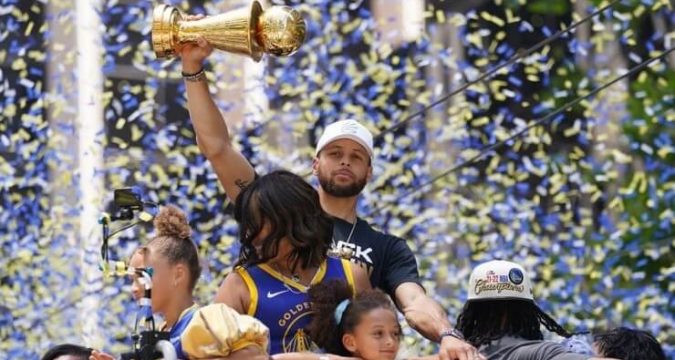 Now that the 2022 NBA season is completed, online sportsbooks are already setting odds for next season. The Golden State Warriors are unsurprisingly the No. 1 favorite to win the 2023 NBA championship. Golden State possesses +500 odds of returning to the NBA Finals next season and repeating.

Golden State just won its fourth championship in eight years, making it the seventh title in their history. Will they add an eighth to their collection in 2023 as the No. 1 favorite? It’s definitely possible. They needed a maximum of six games to defeat the Celtics and Grizzlies during the 2022 NBA Playoffs.

Of the teams with the top 3 odds, the wild card here is the Clippers. In the 2020-21 season, they lost the Western Conference Finals against the Phoenix Suns in six games. For the 2022-23 season, oddsmakers are expecting them to return to the postseason.

Furthermore, the Warriors finished their 2021-22 regular season 53-29 (.646), ranking third overall in the Western Conference. For some, it was quite a surprise to see them make it back to the NBA Finals. It’s not to say the Warriors weren’t a championship-caliber team, but it was the first time the team won a title with Stephen Curry as the No. 3 seed. In the season prior, they finished 39-33 (.542).

Having said that, everything came together for Golden State at the right time. Curry even won the league’s first Western Conference Finals MVP after defeating the Dallas Mavericks in five games. Plus, the two-time MVP became the first player in NBA history to make over 500 threes in the playoffs. Additionally, Klay Thompson was healthy this time around. In Game 6 of the 2018 NBA Finals, he tore his ACL in the third quarter against the Raptors.

For the 2022 NBA Draft, the Warriors hold the Nos. 28, 51 and 55 picks. If the front office chooses wisely, the team will be set to reload its roster. As of today, Golden State also has seven free agents as well. Among these players, three of them are Kevon Looney, Gary Payton II and Otto Porter Jr.

Arguably, Looney is one of the most important pieces. If they suspect Looney will leave this offseason, G.M. Bob Myers will likely draft a big man tonight to replace him. In the end, this team deserves to be the No. 1 favorite for 2023.

Additionally, it’s difficult to say if the Celtics belong in the top 3. They made it to the NBA Finals, but what was so special about their roster? The team needs a veteran All-Star. A number of NBA analysts thought Jayson Tatum was the second coming of Paul Pierce for the C’s. However, he disappeared on the grandest stage.

More importantly, Game 4 against the Warriors should have been a wakeup call. At the time, the Celtics were 7-0 following a loss in the playoffs. That came crashing down in Game 5.

For the 2022 NBA Draft, Boston’s only draft pick is No. 53. Who G.M. Brad Stevens selects with that pick tonight could make all the difference on whether or not this team will return to the NBA Finals next season. Even then, how many decent performances does Al Horford have left in him? He’s 36 years old now.

Not to mention, one main point other folks have mentioned pertains to Jaylen Brown’s importance to the team. The seventh-year player averaged 23.5 points, 7.3 rebounds and 3.7 assists per game in the NBA Finals.

When all the chips were on the table, Brown stepped up. G.M. Stevens needs to support Tatum and Brown with a dependable pure shooter. Defense alone will not beat a team like the Warriors.

Lastly, the Clippers round out the top 3 for next season’s 2023 NBA championship odds. This team is a difficult one to figure out. Kawhi Leonard missed all of last season because of an ACL injury. Considering they were without Leonard, should fans clap for head coach Tyronn Lue?

Perhaps the team had no business of even qualifying for the play-in tournament. Just look at the Lakers. That other team in Los Angeles with LeBron James, Russell Westbrook and Anthony Davis was favored to win the Western Conference.

Despite missing both Leonard and Jason Preston the entire season due to injuries, the Clippers finished 42-40 (.512). They ranked eighth overall in their conference. There was no shame in losing to the Timberwolves and Pelicans in the play-in tournament. It was the first time they missed the playoffs since the 207-18 season, and that was under then head coach Doc Rivers.

Leading into the 2022 NBA Draft, the Clippers have just one draft pick: No. 43. Per multiple reports, the team is only aiming to draft a player for a potential two-way contract. The team already has 10 players under contract for next season. Also, Ivica Zubac has a team option to work with.

And what if the team trades for a player like Kyrie Irving? They’ll be ready to compete at the highest level. All things considered, if Kawhi Leonard and Paul George can stay healthy next season, this team could challenge the Warriors come playoff time in 2023.