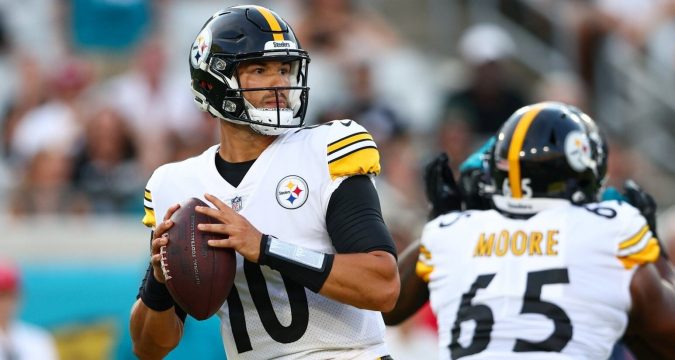 The Pittsburgh Steelers haven’t endured a losing season since 2003. With Ben Roethlisberger retired and Kenny Pickett and Mitch Trubisky added, the Steelers will look different in 2022. Let’s examine the 2022 Steelers’ current record prediction, projected win totals, any intriguing prop bets involving the franchise, and their odds to win the AFC North, AFC, and Super Bowl in 2023.

All odds are from Caesars Sportsbook unless otherwise stated and are subject to change.

Following the release of the NFL schedule, Caesars has provided odds and spreads for 13 of the Steelers‘ 2022 regular-season matchups. Based on those numbers, Pittsburgh is projected as the favorite in two games and underdogs in 11. If their season matches those predictions, the Steelers will have a 2-11 record following Week 14 of the 2022 campaign.

This is one of the most pessimistic sets of spreads I’ve found throughout this offseason. Oddsmakers are unsure of Pittsburgh’s ability to win with an uncertain quarterback situation. But the Steelers have an impressive set of young playmakers, and their defense is at least average.

With six of their games having a spread of 3 points or less for either team, the Steelers are expected to lose in close outcomes. This is normal when you are considered to have the lesser quarterback in almost every game of the season. For now, it’s up to Trubisky to prove oddsmakers are incorrect about this assumption.

Pittsburgh ranked 21st in offensive scoring and 20th in defensive scoring last year. The offensive line has been upgraded, and George Pickens looks like an early rookie steal. Can the defense, which barely received any attention this offseason, get back to its top-10 status with a concerning cornerback room?

Now we know the sportsbooks’ predictions for the Steelers on a week-by-week basis. Let’s look at their season-long odds for win totals, the division, conference, and the Super Bowl.

Entering the 2022 season with the second-hardest schedule and justified concerns over whether this passing game or passing defense will be good enough, oddsmakers are fading the Steelers. Failing to reach an 8-8-1 record would give head coach Mike Tomlin his first losing season ever.

If any of his rosters will go below .500, it’s this one. Pittsburgh’s lone defensive additions were Myles Jack and Larry Ogunjobi. They’re nice but closer to inconsequential than difference-makers who can reshape the unit.

The cornerback position is a mess. Ahkello Witherspoon and Levi Wallace are — at best — decent scheme fits but are pigeonholed to Cover 2 and Cover 4. Minkah Fitzpatrick will have his work cut out for him trying to provide help over the top. The pass rush will need to be exquisite.

The margin for error is tiny in the AFC North. The Steelers received a break when Deshaun Watson saw his suspension increase from six to 11 games. If Lamar Jackson and Joe Burrow go down for an elongated period, it’s possible the Steelers could get a breath of new life and make a playoff push.

We can all but rule out any Steelers in the MVP race, but that doesn’t mean they don’t have viable candidates elsewhere. T.J. Watt has racked up three All-Pro nods and the 2021 Defensive Player of the Year for good reason. He could win it again in 2022.

We also have several solid player props available. Let’s take a look at the most playable ones below.

With Mitch Trubisky set to start the season under center and no clear indication of when Kenny Pickett will see the field, it’d be foolish to bet on the latter to win Rookie of the Year. The only pathway for him to win is to have a Baker Mayfield-esque rookie season where he played the majority of the year and produced at a high level. Pickett has played well in the preseason but isn’t the same type of exciting big-play hunter.

Putting money on Pickens is more intriguing since this class of rookies doesn’t have a star rusher or passer. Pickens has been the most dominant rookie thus far, but he also plays on a competitive depth chart with mediocre or worse quarterbacks. He’s a risk, but his playstyle is more endearing than Skyy Moore’s or Jalen Tolbert’s.

The prop bets are also fascinating. Taking Watt on any award and prop is wise since he’s such a rare talent. But can the offense produce a high-volume rusher and three receivers with impressive numbers?

It’s hard to like this Steelers team within the context of this AFC and AFC North. Their defense is too dependent on their line and safety position to succeed. The offense, which has some impressive playmaking talent and has taken a good risk on Trubisky being a reclamation project, has struggled mightily throughout camp with interceptions.

Pittsburgh will fight tooth and nail in their games but repeatedly come up short. Unless their offensive line is much better and a quarterback emerges as a consistent presence who does more than take checkdowns, the Steelers will fall short more often than not.

There’s a pathway to Pittsburgh getting lucky with turnovers and hitting the over in 2022, but our prediction is for this team to go under their 7.5-win mark. Baltimore, Cincinnati, and Cleveland are too talented to keep the door open for Tomlin and Co. to make a playoff push.

Watt could certainly win another Defensive Player of the Year Award this season, but it’s hard to win individual awards when the team is bad. Unless he registers another 20-plus sack season, he has no chance at repeating his crown. It’s more likely Watt easily clears this sack total for the fourth straight year, so that’s our smarter bet.

Getting a read on how the offense will produce is difficult.

I don’t want any part of Harris’ rushing yard total. Even with an improved line, Harris finished second in the NFL in carries last year and still barely hit 1,200 yards. Unless his efficiency drastically improves and he plays in all 17 games, his total is too tough of a number to have confidence in.

Instead, I’ll buy Diontae Johnson continuing to be a reliable option for Trubisky and Pickett, and sell Chase Claypool as Pickens overtakes his role. Johnson just recently received a contract extension after his breakout 2021 campaign and is the perfect safety valve for both passers.

Pickens is simply a more reliable and talented version of Claypool. But this team won’t pass enough to sustain production to all three players, Harris, and tight end Pat Freiermuth. That leaves Claypool on the outside and us playing the under on his total.