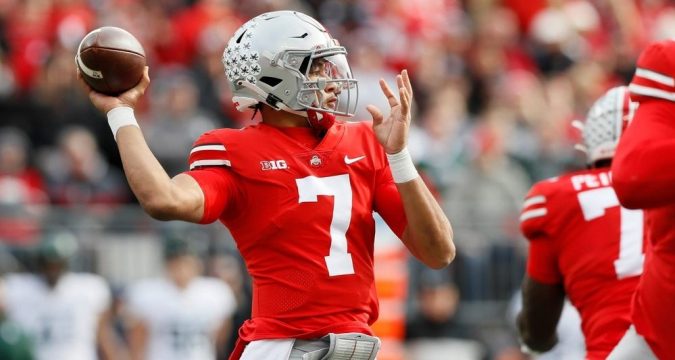 The odds of winning the Heisman Trophy in consecutive seasons are heavily stacked against you. Only Ohio State’s Archie Griffin has won the award in back-to-back seasons, and the Buckeyes running back remains the only player to win it twice. Fittingly, another Ohio State player — quarterback C.J. Stroud — stands in the way of Bryce Young’s bid to become the second-ever back-to-back winner of college football‘s most prestigious award.

Unsurprisingly, the early DraftKings Heisman Trophy odds are led by the two finalists from last season’s awards. With Kenny Pickett and Aidan Hutchinson making their respective NFL homes in Pittsburgh and Detroit, Young and Stroud will continue the battle that raged for college football’s greatest individual prize. The winner may also emerge as the QB1 of the 2023 NFL Draft class.

Young’s résumé is already impressive. In his first year as a starter, he led Alabama to the College Football National Championship. In doing so, he established several program records while setting a new passing yards benchmark in the SEC Championship Game. The Crimson Tide quarterback finished the year with 4,872 passing yards and 47 touchdowns while completing 66.9% of his passes.

Young’s apparent dominance of last year’s Heisman Trophy hasn’t seamlessly translated to his 2022 odds, however. The Alabama quarterback is currently the second-favorite to land the Heisman Trophy with odds of +350, according to DraftKings. Perhaps the historical difficulty of defending the crown is counting against him. Or maybe, it’s that he faces a most powerful adversary in Ohio State quarterback Stroud.

Stroud opens the season as the oddsmakers’ favorite

Many fans and analysts derided Stroud’s inclusion as a Heisman Trophy finalist following last season. After all, the young Ohio State quarterback had been jeered and booed early in his first campaign under center following a difficult start to the year. A defeat to Michigan didn’t help his cause. As a result, Stroud received fewer first-place votes than for fifth place Will Anderson Jr. and sixth place Kenneth Walker III.

Yet, given that the recipient is to exude great ability combined with diligence, perseverance, and hard work, Stroud arguably had the greatest candidacy of all the Heisman Trophy finalists last season. He overcame injury and insult to become the first-ever recipient of the Big Ten Player, Quarterback, and Freshman of the Year awards in the same season.

Despite his difficulties to start the season, Stroud finished 2021 with 4,435 passing yards, 44 touchdowns, and completed 71.9% of his passes. Meanwhile, with 369.6 yards per game, he’s the second-most productive quarterback returning to college football this fall.

It’s perhaps for this reason that he begins the 2022 college football campaign as the odds-on favorite to win the Heisman Trophy. Maybe it’s because he’ll be surrounded with talent again, with wide receiver Jaxon Smith-Njigba also featured among the favorites to lift college football’s top individual honor. Or perhaps, it’s simply because Stroud is that good.

The best non-quarterback odds to win the 2022 Heisman Trophy

Behind Stroud, Smith-Njigba leads a quartet of Ohio State players for which DraftKings currently offers Heisman Trophy odds. You can get a price of +2500 for college football’s leading returning receiver to follow in DeVonta Smith’s shoes as a WR winner of the award. Fellow Buckeyes pass catcher Marvin Harrison Jr. is +15000. Ohio State RB TreVeyon Henderson is +4000.

Anderson was dominant last season. He tallied 31 tackles for loss and 17.5 sacks and was, for many, the best player in the nation. A repeat performance should ensure that he makes the trip to New York in December. However, as evidenced by the significant number of passers in the early odds, the Heisman Trophy inevitably remains a quarterback prize. Anderson will likely have to overcome the odds, his teammate, and Stroud to even sniff the award.